Members of the Mila Maintenance team in Folkestone recently attended the East Kent Housing residents ‘Have Your Say Day’. They joined some of the other contractors working with East Kent Housing at one of the local estates in Hythe, and were on hand to meet with residents and talk to them about the works we do in their homes.

Whilst Tina, Roland and Kim were on site members of the East Kent Housing team spent some time door knocking in the local area speaking with residents and asking them to complete questionnaires about their windows and doors, and then brought back issues that had not previously been reported.

Over a 4-hour period the team had 12 enquiries for work that needed doing but had not previously been reported; some of the residents didn’t realise they could call us directly to report jobs on our dedicated help line.

The team returned to the office and raised the jobs and booked them on with the residents by phone before the end of the same day giving them a fast and efficient service. 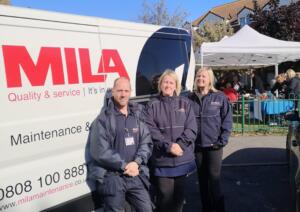 Previous Post We spoke to Chris recently about his time with Mila Maintenance and Installation; this is his story. Next Post Alan Bouttell
About the Author

Having been with the business since 1997, Tristan became Managing Director of Mila Maintenance and Installation in September 2015.

Tristan’s drive and determination have continued to push the business forward with ‘Innovation’ a key driver for him personally and a key thread underpinning the ethos of the whole company.